Marital rape in Thailand had been legal for many years and begged the question as to what the status of women are in Thai society. The new laws which had been passed only a few years ago is interesting. Not to long ago it was legal to rape your wife without any issues with the law. This was simply because Thai law was very specific with regards to the rape laws. It stated by definition that – a rapist is a person who rapes a woman who is not his wife. 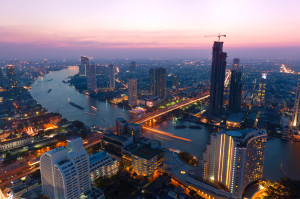 This left the door open to spousal abuse and has been much talked about. Now that the laws have changed and the definition amended and a criminal penalty attached to it one wonders how many people would make use of it and how it will really fit into Thai society. The criminal penalty has now been placed int he same line as those for non-marital rape being that would face up to 20 years in prison and a maximum fine of 40,000 baht. Seeing the first article which I wrote on the status of katoeys in Thailand I note that the bill was drafted widely to include everyone. The bill gives a broader definition of rape to cover female offenders and homosexual rapists.

“In the past, there have been so many husbands who’ve raped their wives and gone unpunished,” Thammasat University law lecturer Dr Matalak Seramethakul said. She was among academics and women’s right activists who have long demanded that the legal definition of a rapist be revised.

Natee Teerarojjanapongs, director of the Thai Political Gay Group, said many gay men were raped by women, who were known as Fag Hags. The term refers to women who associate mostly and exclusively with gay men either because they like their company or are secretly sexually attracted to gay men.

“After the rape takes place, these women demand that the gay men marry them to show responsibility. Some gay men agree to the demand,” he said. With the changing status of the third gender in Thailand and that of women, Thailand is entering in my view an interesting phase of rewritting many of their laws so that it is more compatable with those of international laws.  Interesting times ahead none the less.